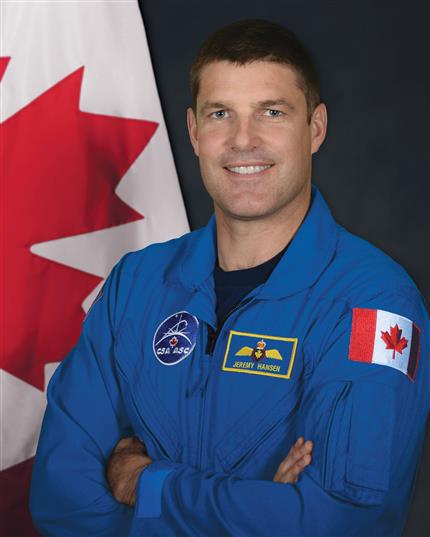 Mission: Waiting for a flight assignment

Personal Data: Born January 27, 1976, in London, Ontario, and raised on a farm near Ailsa Craig, Ontario, until moving to Ingersoll for his high school years. Colonel Hansen is married with three children. He enjoys sailboat cruising and racing, rock climbing and mountain biking.

Education: Colonel Hansen holds a bachelor of science in space science (first class honours) from Royal Military College in Kingston, Ontario (1999). He earned a master of science in physics from the same institution in 2000, with a research focus on Wide Field of View Satellite Tracking.

Experience: Prior to joining the Canadian Space Program, Colonel Hansen served as a CF-18 fighter pilot and held the position of Combat Operations Officer at 4 Wing in Cold Lake, Alberta. His responsibilities included ensuring the effectiveness of NORAD Air Defense Operations and the operability of Deployed and Forward Operating Locations (Bases).

Colonel Hansen’s flight experience began at the age of 12, when he joined the Air Cadet Program. He obtained both glider and private pilot licenses through this program by the age of 17. This training led to his acceptance to Collège militaire royal in Saint-Jean-sur-Richelieu, Quebec.

While waiting for a flight assignment, Colonel Hansen represents CSA at NASA, and works at the Mission Control Center as Capcom—the voice between the ground and the ISS.

In addition to his day-to-day work, Colonel Hansen remains committed to building and maintaining his skills; he takes spacewalk and robotics training while continuing to learn Russian. He has taken part in geological expeditions in the High Arctic and participated in the European Space Agency’s CAVES program, during which he lived underground for six days. He was also a crew member for NEEMO 19, where he lived and worked on the ocean floor in the Aquarius habitat off Key Largo, Florida, for seven days simulating deep space exploration. Colonel Hansen also continues to fly the CF-18 fighter jet with the Royal Canadian Air Force and had the privilege of inspiring young Canadians by flying the historical Hawk One F-86 Sabre jet.